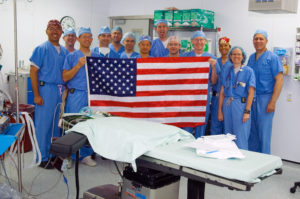 Demetrio Aguila, MD, FACS has deep and varied military experience. His years in the trenches give him a unique perspective on and passion for treating military veterans.

During his senior year of college, Aguila joined the Air Force. After graduating from Boston University, the Air Force sponsored his medical school education.  He did his general surgery internship at Wright State University in Ohio and then went to the USAF School of Aerospace Medicine in San Antonio, TX.

He was then assigned to the 80th Fighter Squadron at Kunsan Air Base, Korea, as a combat flight surgeon flying F-16s and patrolling the DMZ between North and South Korea.

The Air Force subsequently sponsored Aguila’s Otolaryngology-Head & Neck Surgery training at the Mount Sinai School of Medicine.  From there, he was assigned as the Deputy Commander of Surgical Operations at Malcolm Grow Medical Center at Andrews AFB, MD.  While there, he again deployed to Operation ENDURING FREEDOM, performing over 300 operations in less than 5 months, and flying multiple combat missions in support of the war.

While at Mount Sinai, Aguila became interested in reconstructive surgery. The Air Force sponsored his Plastic & Reconstructive Surgery training at the Johns Hopkins Hospital and the University of Maryland.

Aguila was sent on one last diplomatic mission to eastern Europe as the mission’s sole combat-ready trauma-trained combat flight surgeon in support of the Senate’s diplomatic efforts.  Finally, Aguila was reassigned to the 99th Surgical Operations Squadron at Nellis AFB, NV – home of the USAF Fighter Weapons school.

Dr. Aguila has received many military honors including:

We’d love the opportunity to help you live an improved life.

Let’s see how we can help.

Located in the heart of Nebraska.

Where you can find us